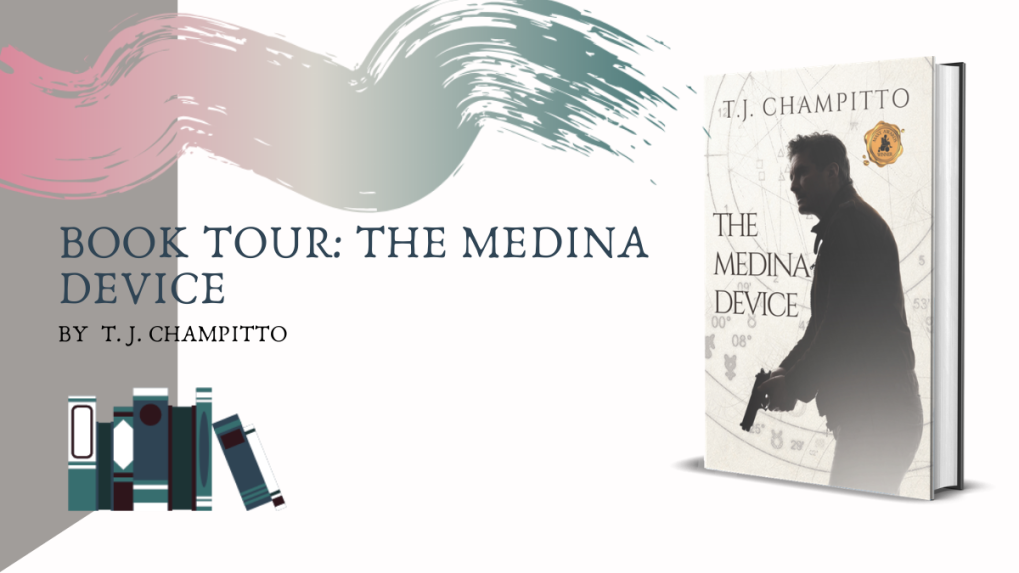 I would jut like to begin by thanking T.J. Champitto and Breakeven Books for inviting me to take part in the blog tour for The Medina Device, and for allowing me to read and review this prior to release.

A few facts about The Medina Device:

Former Navy SEAL Cameron Lyle is transitioning to life as a husband, father and government contractor. But his thirst for adventure has driven him to a secret life of high-stakes crime that has gained the attention of the FBI. When a mysterious device is unearthed in the mountains of Bolivia, an ancient brotherhood emerges to offer Cameron the opportunity of a lifetime–to steal the greatest discovery in human history from a rogue cell of U.S. intelligence officers. As a beleaguered FBI agent closes in, and a team of deadly assassins hunt him down, Cameron leads his pursuers on a worldwide manhunt as he sets off to find the scientist who can explain it all. Secret societies, ancient technology and international espionage all converge in a journey that will ultimately test the bounds of reality.

I want to just highlight my rating criteria first…

I REALLY LIKED THIS BOOK.

There is a fine line between a five star rated book and a four star rated book because I still really liked these books, the difference is that these books just slipped up on occasion. They may have fallen flat in a subplot or left certain plot threads unanswered. It will honestly, be something pretty small but enough to knock it off  obsessive gushing level. I will still recommend these books, though only to those who like the genre, and will likely read them again just not at the rate I would reread a five star beauty.

I LIKED THIS BOOK.

These books are good solid reads but simply fall into the average category. They tend to be the fun and easy reads that are still enjoyable even though they have their flaws. These are still good books, don’t doubt that, so I would still recommend them but only when they fit a few criteria someone has listed when asking for recommendations. I am unlikely to read these books again, unless I’m really in the mood for the book specifically.

This book, for me, sits firmly in the 3.5 rating, it is a good solid read that I enjoyed and read easily. This book isn’t quite a four star, but I wouldn’t feel right categorising it as average because it isn’t.

I don’t read thrillers often, if at all, but I was contacted by Breakeven Books and asked to participate in this Tour. Having read the blurb and generally wanting to read a little outside my genres I accepted. It sounded super interesting and is exactly the type of movie I LOVE. So, if I can love a movie of this nature then surely I can love a book of this nature, right? Exactly, and I did. I found this book to be really enjoyable.

Champitto really captures an energy in his writing, especially with the main character Cam’s family, there is such a vibrance to their interactions. Once I had adjusted to his writing style I enjoyed it. Though, a few character introductions felt like they were their online dating profiles, Hannah likes long walks on the beach and excels at law. If you feel me? While I noticed this it isn’t a massive issue as you are not introduced to tons of new characters.

Champitto managed to write one of those books that are so well thought out and their characters so nicely crafted emotionally that I wondered if the author had ever been in their position. That was the case for this book, I wondered if Champitto had served in the military, if he had made decisions that either saved or ended others lives. I think that is always a sign of a talented writer, their characters are real to the point you think the author must have a personal knowledge of this stuff!  Though, despite this raving I did want more history from these characters. While Champitto is talented and his writing does evoke quite a lot of emotion I found I didn’t really know the characters beyond this plot. Which isn’t necessarily a bad thing, this is a shorter book to what I am used to and it still managed to capture me, it may not have had the most developed characters but what you saw you loved, I genuinely found myself quite attached and invested in Cam, Michael and Trip. I found Rand the least fun of the characters but once he was surrounded by other characters I like him a lot more.

I really enjoyed the plot of this book and found myself constantly wanting to know what happened next, it has great action sequences and is really quite suspenseful. The pace is a nice tight and ever moving thing, and does well to give you the feeling that time is of the essence.

I definitely wanted a little bit more to go wrong in our characters journey though, there were a few instances when I wondered if the characters would just manage everything. Don’t get me wrong there are definite consequences and bumps in the road but I wanted a few more little hiccups here and there.

Overall, this was a great introduction to a new genre for me, I read it quickly and was pretty gripped by the plot and its characters, while I probably wouldn’t read this book again (more because once you know the twists and ending its not as suspenseful) I would definitely read future books written by this author.

This is a promising debut and as I said above, I would like to see more from this author!

Thanks for reading and have a great day!

All Booked Up At The Moment
itskooreviews.wordpress.com/
Loading Comments...