This review is part of my judging effort for the SPSFC. For a little intro to the whole thing and an explanation of my judging style, see this practice review. 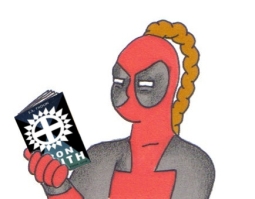 Next on our semi-finalist roster for the SPSFC was Iron Truth, Book 1 (of 4) of the Primaterre, by S.A. Tholin.

Let me divert before I even start by saying that this book was unique in a lot of ways, but the most noticeable at first glance was its sheer size. This was an epic-fantasy-level chonker in sci-fi form. A unit among the slim and slinky space operas and dystopian spec fics. A real pagey boi.

And I loved it!

Yes, it was a job of work to read through. And I relished it. I would have relished it more, taken it slower, and delved right into the next one were it not for my other reading commitments. There are books where you can tell the word count is all padding, pointless description and messing around, but this wasn’t that. This was the big bastard book where the mass amounts to substance. It’s possible to provide a similar level (but I would argue not equal) of reality and granularity and foundation to a world in a smaller package, but I am all for the philosophy of here is my story. It’s fucking large. Get busy.

So, with that being said up front, the story itself was a whole lot of fun. When Joy, a noble but naïve would-be colonist in storage aboard a starship, is awakened to find her ship has crashed and over a hundred years has passed while her stasis pod lay in the wreck, she’s flung face-first into the deep end of a collapsing interstellar empire and more spiders than one could reasonably expect.

Nothing is what it seems and every new layer of complexity in the story brings everything that’s come before it into a new light.

It kept me turning the pages and while I wasn’t necessarily super-hooked by the opening, the immediate plot twists and dramatic development was so much fun. When you put a character out of time in the context of a hostile alien world, immediate immersion in what is essentially a post-apocalyptic frontier environment with Starship Troopers-esque[1] fascist autocracies behind the scenes … and then you throw in space marines of the Church of the Papal Mainframe … what you get is a whole lot of fun and I thoroughly recommend it.

My immediate guess was that the demons the Primaterre troops considered the great enemy of humanity were just part of the space marine training program – perhaps implanted memories for propaganda purposes. But there was way more to it than that, and there’s none of the neat-and-tidy classifying and resolving of plot points and mysteries that would be (to me at least) incredibly annoying in a story of this scope. No, things are not simple and what we end up with is a messed-up world that the reader struggles to understand just as Joy does. While we’ve been sheltered by an endless progression of simplified and homogenously-packaged narratives where arcs have endings and everything has a purpose, Joy was sheltered from reality by her brother. And we are all in for a rude awakening.

As the story went on, there were more and more layers, more and more details, and only the very skilled writing and very readable storytelling style kept it from becoming an overwhelming brick o’ words. Like I say, it’s possible for smaller books to achieve this but that sort of intricacy usually requires exponential complexity from the author and concentration from the reader. A big thumper can just lay it all out and let the audience become immersed. And that’s what Iron Truth did. Tholin told the story right, and did justice to its context.

From the deep dark history witnessed through an assortment of technology and storytelling techniques, to the quasi-religious concept of purity and the reverence with which the denizens of the Primaterre view Earth-born people … every part of this is stunning. Extra points, my Nordic associate, for slipping the Finnish Väinämöinen (okay, Tholin wrote Vainamoinen, needs the correct letters but I’ll let it pass) and the Kalevala into the story as planets and regions in the interstellar empire. Gave me a happy little Suomi mainittu feeling, and lent a real sense of human legacy to the future we see in the book.

Tholin is tasteful and smart about it, but we know what the demons are doing when the really gut-wrenching grossness slides in and things go all Event Horizon. We know. Beyond those subtle but disturbing hints, some rapey Cato hillbillies and a sweet (dare I say, pure?) love affair between our two main protagonists, there’s a suitable amount of sauce on this 244,350-decker burger. Let’s award it a proper Swedish or Finnish sauna out of a possible that sauna from Goldeneye where Xenia Onatopp tries to crush James Bond between her thighs like a smarmy British walnut. It’s not actually a very high score, in case you were still uncertain about how saunas actually work. But it’s fine.

The demons, especially once we start getting into their origins and possible explanations, are solid Firefly-reaver nasty. And don’t even get me started on the space marines and their combat injuries – and the injuries their armour preserves them through! That shit was haunting, and so well done. Add in some more classic body horror with ‘the red’ and a whole lot of gross spiders, and you end up with four-and-a-half flesh-gobbets out of a possible five on the gore-o-meter.

I enjoyed some of the more psychedelic inner journeys and confrontations in this story, even though I tend to roll my eyes and skim that stuff under normal circumstances. But all in all, there wasn’t a lot of WTF in this – so much as unexplained and unseen depths and details that are gradually revealed and explained. And while there is still a whole lot left untold by the end of this book, that’s what the rest of the books are for. I frankly don’t count a question I haven’t had answered yet as a WTF, so Iron Truth gets a great big pile of red lichen out of a possible … that Goldeneye sauna again? I don’t get it, but the point is there was plenty of mystery and intriguing construction here, but not much actual WTF.

I know I’ve listed and referenced a lot of ways in which elements of this story are reminiscent of sci-fi tropes and other creations, but there is nothing derivative in it. I only mentioned the things I was reminded of because I like them so much and was happy to see them so well handled in an interpretation this expansive and in-depth. Wonderful stuff. This was a grand story, on a worldbuilding scale you don’t often see in sci-fi. Four stars on the Amazon / Goodreads scale!

[1] The movie, not the book. Although the perpetual-war and other sociocultural elements of currency-according-to-contribution was cleverly similar.

One thought on “Iron Truth: An Edpool Review”