(things have been hectic and I’m running late, sorry! Here is a couple of reviews to make up for lost time)

This review is part of my judging effort for the SPSFC. For a little intro to the whole thing and an explanation of my judging style, see this practice review. 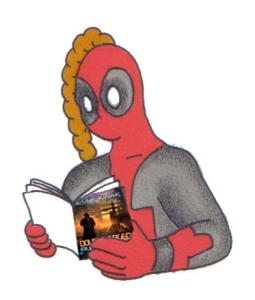 For the final week of Team Space Lasagna’s round one reviewing cycle, we had four books to read instead of three. So I made a bit of an early start and here is my review of Double Edged, The Bulari Saga Book 1, by Jessie Kwak.

I was drawn into this story immediately, its prologue was exciting and well-written and set up a very interesting heist and overall plot. Some parts of the prologue came back into the story proper, but some parts – *cough-cough-cough-Oriol-cough-cough* – took way too long and others just didn’t seem to come back at all and so their relevance was a kind of annoying non-event. This happens with prologues too often in my opinion, so I might just be transferring some of my generalised irritation at the phenomenon onto this book specifically. Still, my point is it was a great prologue and the opening chapters were great too, the only drawback was how long it took to bring the two together.

The story is written in present-tense, which I found a bit off-putting but plenty of people like it, and it is a good way to give immediacy and stakes to a story. It’s a perfectly cromulent tense, is what I’m saying. Wait, why is my spell-checker not tagging cromulent as a typo? Has the English language been embiggened? Holy shit. It’s not tagging embiggened either. I digress, but you have to admit I have reason.

Anyway, back to the story. Jaantzen and his found family, including daughter-figure Starla, are enmeshed in a power-vacuum struggle in the sci-fi organised crime rings of Bulari, a cool sort of space Ankh-Morpork. With the death of crime lord Coeur – she’s actually a crime lady but that sounds just incredibly dumb, and Kwak made exactly the right call in rendering the crime lord term as gender neutral and I don’t care what the SJWs say – the underworld of Bulari is in turmoil. And since the underworld of Bulari also includes most of the actual civic leadership, it’s probably just easier to say “world”. Coeur was the mayor, after all. The Patrician, if you will.

Assassinations, political intrigue, mysterious locked cases and a sci-fi drug called shard are the order of the day in this action-packed and highly enjoyable story.

I was also really intrigued and delighted to see some outside-the-box character work going on here. It was a really interesting take on the space gangster / sci-fi godfather subgenre. While I’ve read enough good modern (independent) sci-fi by now to no longer consider strong female characters to be new or trope-busty, these ones were particularly enjoyable – and the sad fact is I am still mentioning them, so we clearly still need more of this good stuff. Also, I said “busty” by accident and now I keep looking back at it and wondering if I should change it but we all know I’m not gonna.

Furthermore, we had a really cleverly worked-in deaf character, and her deafness wasn’t played as a plot-point or some inlet for a stupid superpower, it was just a fact. To such an extent that I was puzzled, quite a significant way into the story, why the main band of protagonists were signing and texting to each other, and not “saying” things except when they got agitated, and I wondered if maybe it was a part of the world-building, like a secret language or a cool “everyone on this world is silent” element, but nope. It was “just” an adjustment to this character and it was really excellent.

Expect some twists as you go, and the introduction of the big-picture plot arc but not much in the way of closure yet. This is, after all, the opening book in a considerably-sized series (8 books [5 main series books and 3 prequels], let me just say, is the perfect size and composition for a science fiction series and I thoroughly approve). We’re treated to a nicely-constructed setup to a larger mystery and threat, with good characters and a nice mid-range plot for this book to get us into it. On a specific level I really enjoyed the setup of the planetary structure, the globe-encircling desert, all of that. I like. And Jaantzen’s philosophising about parenthood is lovely and thought-provoking.

On the subject of the characters and the writing, for most of the book I was blinded by anger about why Jaantzen was even helping Coeur instead of shooting her in the face. Not to spoil anything but he has excellent reason to hate her and – well, my notes as I was reading were as follows:

I can’t enjoy this because I’m just so mad Jaantzen isn’t shooting Coeur in the face over and over again. Guess that’s good writing? Unless the author doesn’t nail the explanation. Because a vague “he gave his word” is not enough. I will decide if bad writing or great.

Ultimately, I was left with the judgemental declaration of “good writing,” since while I was still utterly unconvinced and pissed off by his reasons for not killing Coeur and am absolutely livid that he didn’t kill her and put her head on a spike over at the mayor’s office or something, I hold out hope that we’re going to get satisfaction one day – and in the meantime Coeur is a cool enough evil protagonist / antagonist / strange bedfellow that she’s worth keeping around and expanding on for another couple of books. On a story-reader level it’d be a waste to kill her. Just … I’m hesitant to read more of this series rather than just finish it in my head and pretend something satisfying happens, because I was burned by Robin Hobb and I’m not going back there. Never. A. Fucking. Gain.

It wasn’t until around the 60% mark that Oriol returned from the prologue (aside from a couple of brief mentions) and we find out a little bit of what he was up to there and how it relates to the story, but it wasn’t what I’d call a perfect link-up. The Demosga family is apparently not very important after all, but at least the Dawn was mentioned, and agriculture. Oriol’s return to the story and his relationship with another of the protagonists is really very sweet, too.

We end on a cool epilogue and a final tantalising closure-but-not-really with the thingies in the globes that were in the locked cases. Was the prophet of the Dawn cult right about everything? Well, I mean, he was a murderous nutbag so fuck him, but maybe he was? Guess we’ll see!

There are some tender moments between lovers here but most of it is the familial love of Jaantzen and his crew, and a whole lot of space mobsters and shoot-outs and stuff, which are a kind of sex but in another more accurate way, there was no sex. And that’s fine. I’ll give it a shard out of a possible dark crystal. Wait, that’s not sexy. Out of a possible dark, throbbing crystal. There we go.

We get plenty of nasty murders, beatings and torture stuff, mob hits and gunfights and mad cultist rampages. It’s good and violent, but not precisely gory. Still, I’ll award it three flesh-gobbets out of a possible five. It’s got some brutality to it.

The story and plot elements are all quite clear-cut and don’t have much in the WTF department. There are mysteries, sure enough, and alien relics and locked boxes and deep prophetic apocalyptic wossnames and all that, but they’re none of them really WTFs. I give Double Edged a shard out of a possible all the different varieties of troll drugs on the Discworld.

This was an enjoyable read and the blurb-statement “Perfect for fans of The Expanse, Firefly, and The Godfather” is not an idle brag (nor is it in any way a humble one, but I’ll allow it). I will still hesitate to look at the rest of the series until reassured that Jaantzen and Coeur get some kind of arc-ending that doesn’t make me inarticulate with rage because I don’t have time for shitty painful injustice in my fiction, I read this stuff for fun. So if someone can help me out that would be appreciated. Three stars on the Amazon / Goodreads scale!