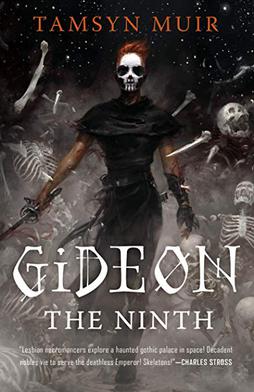 Welcome to my first addition to the site. The five people who read my blog may know me already, but if you do not, my name is William, a life long rural New Yorker in the United States. I love Fantasy, but am also a fan of Science Fiction & Horror. For my introduction here I bring you my review of Gideon the Ninth by Tamsyn Muir. This is book one of Muir’s Locked Tomb series. I have to say, I’m impressed. Gideon the Ninth is such a unique story. It combines Soft Science Fiction, Necromantic Fantasy, and Punk Rock Insanity. I honestly cannot come up with a more suitable description than that. I had wanted to read this before it was even available. I only put it off so long because it seemed so insane and knew more books were going to follow it. Finally, needing something different to dive into, I give you my review of Gideon the Ninth.

This book aptly follows Gideon Nav, an indentured servant of the Ninth House within a Galactic Empire. She is the young adult ginger warrior of this series, complete with skull face paint, dark cloak, sword, and snarky attitude. Quite the picture painted for you there. Even as an indentured servant of a Necromantic space faring empire with an Immortal God Emperor, she gives zero shits about angering anyone. To say she is confident would be an underrepresentation of an amazing character.

“Why was I born so attractive?”

In the beginning of this, depending on your sense of humor, Gideon may overwhelm some readers. Her humor hits me just fine, but others maybe not. Do not fear though dear readers. Gideon has to adjust quite quickly, based on new circumstances that forces her to alter how she interacts with others. You will find much of her over the top attitude is directed toward our other major character, Harrow, the Ninth House’s Heir. While Gideon is a master with the sword. Harrow is a master of Necromancy. Quite the dysfunctional duo. What they do have in common is that they are both amazingly written. A servant and an heir. Completely different statuses. Different personalities. Different viewpoints. A great adventure for us.

While this is a very character driven story there is much going on in the backdrop. This galactic empire has nine noble houses. The Ninth house guards a locked tomb for the empire and are essentially a death cult. You will get to meet and learn about all the houses in this book though. Muir does this without revealing much about the wider universe. She’s super tricky here. Another thing she is quite good at is there is not much future tech, or weapons in this book…yet you won’t care. The only thing that really lets you know there is space travel, are spaceships. Even then we do not get much of even them. This is a brave choice, but one that works exceptionally well in this book.

“I cannot conceive of a universe without you in it”

This space faring empire relies heavily on Necromancy and swords as their primary fighting tactic. Though how they wage war will be interesting to see. I cannot imagine other civilizations rely on necromancy and swords. We get teased that there is a war against someone out there, we will need to wait on that it seems. This intro book is mostly a complex mystery that takes place in a huge, haunted structure, perfect! All the heirs and their cavaliers (specially trained bodyguards) are invited to this place to seemingly compete to become a Lyctor.  Lyctors are powerful immortal Necromancers that work directly with the emperor. This is of course Harrow’s seemingly main goal and as for Gideon, well, she just wants her freedom. Well actually she also wants to be awesome. These characters grow exceptionally well throughout this mysterious place full of death and intrigue. You will be trying to figure out what is happening and every time you think you might know, you’re wrong!

“Yes you can, it’s just less great and less hot”

The fact that Muir combines fantasy and science fiction but doesn’t reveal too much about either while giving you amazing character work shows me that she is an author to watch. The characters in Gideon the Ninth feel extremely unique, special in their own right, they really come alive. You would think a bunch of noble necromancers would be similar, but they’re oddly not. Muir is able to break apart fields in necromancy and types of house personalities exceptionally well. I cannot wait to read book two to see how she expands on this. Of course, I should also warn people as a world of necromancers there will be a lot of gross descriptions of blood, sinew, corpses, bones…well you get the idea.

“Maybe it’s that I find the idea comforting…that thousands of years after you’re gone…is when you really live. That your echo is louder than your voice is.”

Personally, the most important thing I took from this book, is that we are not all so different. As a thirty-nine-year-old heterosexual male, I felt connected to this young gay warrior woman in a futuristic landscape. Representation in media is important for this very reason. We’re all not so different as we believe. I digress though. Gideon and Harrow are two characters that have shot up my favorites list. Not just as individuals, but as a duo. Book two I know will be from Harrow’s perspective and I’m betting it will be quite wild to get the PoV of a necromancer in this world. If you’re looking for something quite different in the SFF genre I highly recommend this book. I will be keeping an eye on Tamsyn Muir as her career grows.

Thank You for choosing to read my first write up for the site. If you wish to connect with me more I’m quite active on Twitter @thatdarkrogue.