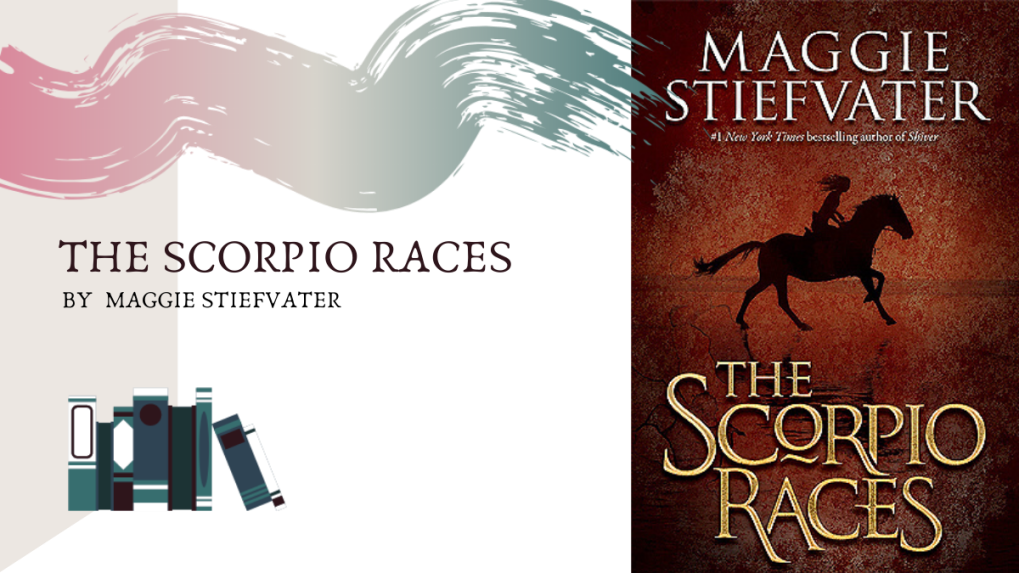 A few facts about The Scorpio Races:

I read The Scorpio Races on my Kindle.

It happens at the start of every November: the Scorpio Races. Riders attempt to keep hold of their water horses long enough to make it to the finish line. Some riders live. Others die.

At age nineteen, Sean Kendrick is the returning champion. He is a young man of few words, and if he has any fears, he keeps them buried deep, where no one else can see them.

Puck Connolly is different. She never meant to ride in the Scorpio Races. But fate hasn’t given her much of a chance. So she enters the competition — the first girl ever to do so. She is in no way prepared for what is going to happen.

This book got my attention for a number of reasons, one being animal companions because, well animal companions are awesome and the other the actual premise of the book. The idea of monstrous water horses competing in a deadly race was something new to me, having not read anything similar to it at the point of reading. The lore in which this book is based off wasn’t anything I was familiar with and so I was drawn in.

This is a decent read and I enjoyed it but it also didn’t exceed anything beyond average falling flat in a few areas.

I loved Sean and Puck and their natural and realistic relationship. I was a little skeptical at first with it being YA, but it felt both mature and realistic in its development. It was not instant love or littered with meaningless exchanges and it actually felt somehow powerful, a little profound. I don’t really know how to explain it but I thoroughly enjoyed it.

The plot of this book, as previously said, drew me in enough to pick this book up but unfortunately it was weak in several areas and fell flat for me. I would have liked a more emphasis on a few areas and I didn’t understand certain character motivations and felt like they were really underdeveloped. For example, I didn’t understand the drama that unfolded with Gabe (Puck’s brother). It seemed surface level at best and I couldn’t quite understand the sudden decision to leave and then the avoidance of his siblings. For him then to be all ‘I can’t do it anymore’ when we have seen nothing of his struggles. That whole side of the story just felt off, as if it was purely there as a reason for Puck to enter the race.

I would have quite liked to see more from the encounters with the emerging water horses and their origins instead of riders simply using previous mounts. Especially when there was actual emphasis on this time, a time when the island changes becoming more deadly as these creatures begin stirring from their depths and coming ashore.

In terms of world building Stiefvater created a heartfelt and weighty world, you felt the desolation of this odd little island in which the story is set and the community that filled it was well developed. I appreciated the split within the island for too, of those longing to leave and those wanting to stay having a deep love with the island and its values.

Overall, this was an enjoyable read and I liked Puck and Sean and the emotional depth of this book but it was still weak in several areas.

My Tweets
Books and Chocaholic
BEFOREWEGOBLOG

Reading All The Books

Eyes on the Ball

Thoughts from the world of sport and the Schmoedown

The Little Booknerds in the Corner
Book Vagabond

But I really ought to be doing something else....

With freedom, books, flowers, and the moon, who could not be happy?

The place to read book reviews, bookish posts and the occasional off topic posts

Because life is better served with a good book and a cup of tea. Book reviews and general bookish writings. I love many genres, so all manner of books may appear on my blog.

always late to the SFF party ...

Tea, Books and Other Parts of Life

Your Source For Young Adult Books, Unboxings, and All Things Bookish