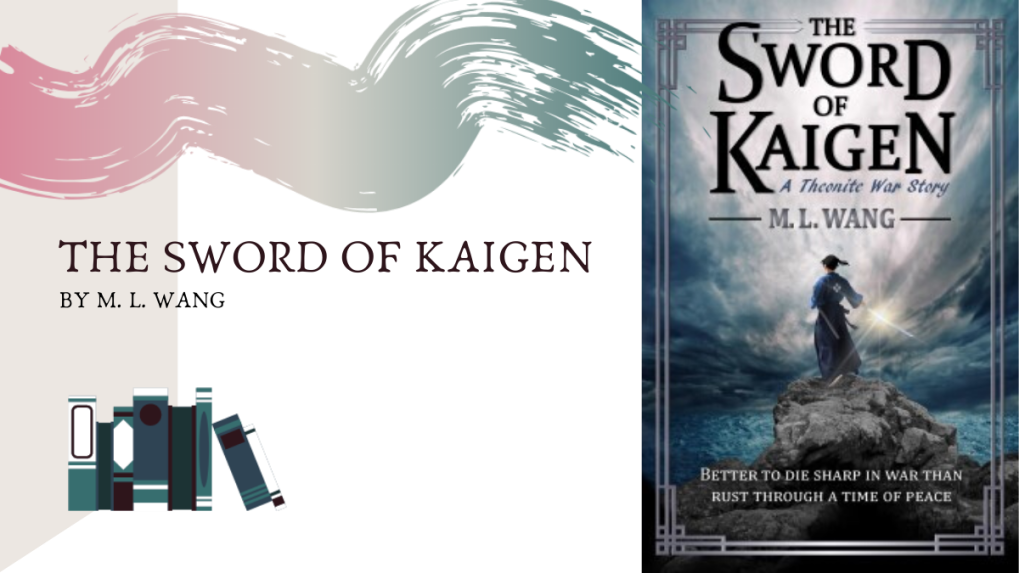 A few facts about The Sword of Kaigen:

I read The Sword of Kaigen on my Kindle first but I enjoyed it so much I bought the paperback for my shelves.

*Winner of the Self Published Fantasy Blog-Off, Hosted by Mark Lawrence*

A mother struggling to repress her violent past,
A son struggling to grasp his violent future,
A father blind to the danger that threatens them all.

When the winds of war reach their peninsula, will the Matsuda family have the strength to defend their empire? Or will they tear each other apart before the true enemies even reach their shores?

High on a mountainside at the edge of the Kaigenese Empire live the most powerful warriors in the world, superhumans capable of raising the sea and wielding blades of ice. For hundreds of years, the fighters of the Kusanagi Peninsula have held the Empire’s enemies at bay, earning their frozen spit of land the name ‘The Sword of Kaigen.’

Born into Kusanagi’s legendary Matsuda family, fourteen-year-old Mamoru has always known his purpose: to master his family’s fighting techniques and defend his homeland. But when an outsider arrives and pulls back the curtain on Kaigen’s alleged age of peace, Mamoru realizes that he might not have much time to become the fighter he was bred to be. Worse, the empire he was bred to defend may stand on a foundation of lies.

Misaki told herself that she left the passions of her youth behind when she married into the Matsuda house. Determined to be a good housewife and mother, she hid away her sword, along with everything from her days as a fighter in a faraway country. But with her growing son asking questions about the outside world, the threat of an impending invasion looming across the sea, and her frigid husband grating on her nerves, Misaki finds the fighter in her clawing its way back to the surface.

This book is just, wow. I would say I have no words but that’s a lie! I could praise this book all year round. This is easily one of the best books I have read this year, I think it is maybe second 🤷‍♀️ quickly thinking what I have read so far this year.

I found this book from stalking the judges of Mark Lawrences self-published SFF contest on Goodreads because lets be honest they find some diamonds!

I was bound to love this from the start, I have always loved Eastern Asian cultures, and the concept of warrior families holding such high regard for honour, something about it has always gripped me. So, this being a Japanese inspired military/warrior world with magic it ticked all my boxes.

Mamoru, what a character! This boy, way beyond his years, is so incredible. He has such depth and so well written. By the first chapter I loved this boy, his energy and drive was infectious. He is so complex and so strong. He grew so much throughout the book, facing the realities of his world and understanding his place in his world. I think he is one of my favourite characters ever written.

Misaki, again, wow. This woman made me feel strong yet beaten. I was pulled so far from myself and thrust into her sorrow and dislike of her life, it was truly remarkable. I longed for her to return to what she was and to take her sons, and understand the were hers too and not just her husbands. I was demanding she know she is more. This character was such an emotional roller coaster. Again, as with every character in this book, she was so well written. She was strong and flawed. Her growth was also incredible. It was truly something magic to experience her grow and accept the realities of her life. Her relationship with her husband was such a profound journey and one I love.

“A life of dangerous adventures might seem worth it now, when you are young and seemingly invincible, but one day, you will have children, and you will not want that life for them.”

Every character in this book was rich and well written. Her sister in law with her infectious personality. Hyori with her vulnerability. Gods, I could give an example of a character and identify something that was uniquely them for each character written.

At one point, a secondary character is telling the tale of the Matsuda history and I swear I was so sucked in, I was sat in the house after a harrowing journey and was listening to a history I knew already but seeing it in a completely new light, and I felt the significance of it all. The way in which this book is written is phenomenal. It is so real, for lack if a better word, and is so rich in detail and history. This book is truly a worthy winner of the SPFBO. No doubt.

I loved the world that was created, it was so unique to have this village that was so set in the old ways, and traditional yet the rest of the empire was in such a technical age. The trials they faced because of it. This world held nothing back.

I loved the plot, it was so well paced. Every single word gripped me and held me tight. It was such an intense book, and the magic system is one of my favourite. I really like elemental magic, and this gave the The Last Airbender vibes at times. I almost imagined the fights scenes as a dance sequence, much like a kata.

Overall, this is exceptional and a must read! It is exceptional read, rich in the smaller details such as clothing and decoration. Im not familiar with the honourifics but each one I checked was spot on.

PLEASE EVERYONE READ THIS BOOK!!

One thought on “Review: The Sword of Kaigen by M.L. Wang”

A Fantasy and Science Fiction haven

Adventures of a Bibliophile
www.lousbookstuff.com/
AdeelReads