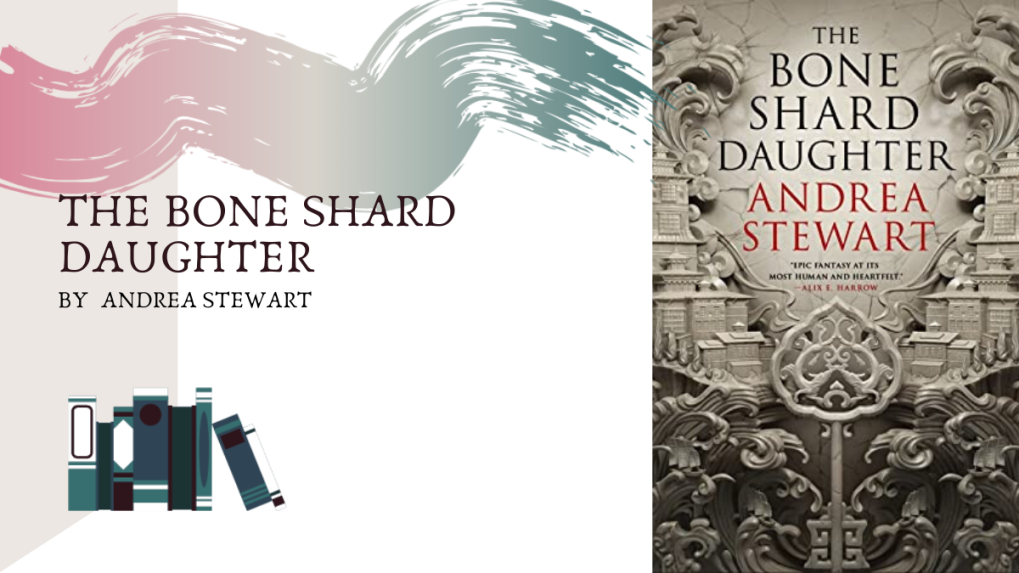 A few facts about The Bone Shard Daughter:

I read The Bone Shard Daughter on my Kindle and was provided with an e-ARC in exchange for an honest review.

In an empire controlled by bone shard magic, Lin, the former heir to the emperor will fight to reclaim her magic and her place on the throne. The Bone Shard Daughter marks the debut of a major new voice in epic fantasy.

The emperor’s reign has lasted for decades, his mastery of bone shard magic powering the animal-like constructs that maintain law and order. But now his rule is failing, and revolution is sweeping across the Empire’s many islands.

Lin is the emperor’s daughter and spends her days trapped in a palace of locked doors and dark secrets. When her father refuses to recognise her as heir to the throne, she vows to prove her worth by mastering the forbidden art of bone shard magic.

Yet such power carries a great cost, and when the revolution reaches the gates of the palace, Lin must decide how far she is willing to go to claim her birthright – and save her people.

ADD IT TO YOUR GOODREADS

The Bone Shard Daughter is set within a failing empire which is made up of several islands. The emperor rules in name only, while he spends his days hidden away in one of his many locked rooms  while his monstrous constructs regulate and police the empire. But at what cost? Rebellion is brewing and his people dying, this debuts follows several characters as they make their way through this world and find their place.

Stewart tells this unique and intriguing story through the eyes of five very different people, Lin, Jovis, Ranami, Phalue and Sand, and in a slightly different way. Lin and Jovis are both written in first person while the other three POV’s are in third person. At first when I read that this was the case I was worried it would be terrible and come across disjointed and disruptive to the reading experience. This is not the case at all.

With regards to the plot, Stewarts keeps a great pace and keeps you reading with this quite thrilling plot while thrusting you into a rather heartfelt journey. Stewart’s characters are well developed and rich in detail. I thoroughly enjoyed each characters journey and their growing relationships and loved reading each one of them, though Sand was my least favourite. I simply found myself wanting to get to another characters chapter sometimes.

I really enjoyed Lin as a character and found her story the most gripping and intriguing but I truly loved Jovis and Mephi. I am an absolute sucker for a companion so this really did it for me. We are still yet to know just what Mephi is but it is obvious he is key. Ranami and Phalue, while having less of a spotlight were brilliant, and such a gem to read. The two characters brought forward a great deal of emotion. Stewart did brilliantly at portraying the issues they faced, one rich and one poor, while not leaning towards one lifestyle in particular. At times I felt, truly felt, for Ranami and the sheer frustration of Phalue’s insistence that the system worked yet in the next beat I was so angry at Ranami for risking Phalue and not thinking past her own needs to change her outlook.

I loved the idea of the constructs within this story and the use of bone shards, it felt quite Frankenstein’ish in that these crazy constructs are made up of several animal parts and then imbued with life through bone shards. The magic is what caught my attention and it didn’t disappoint, we learn enough and understand it and its relevance but also are teased with a previous kind of magic, one elemental I nature. I suspect we will learn more of this and the mysterious Alanga in the next instalment.

Stewart’s writing style is lovely to read. I always feel like the beginning of a novel is the longest, It’s the waiting to fall into rhythm with the writing style and to form attachments to the characters, but with Stewart it didn’t take long to meet that rhythm. There was some repetitiveness with a few words and phrases but beyond that I felt that Stewarts’ writing was elegant and well written.

Overall, I really enjoyed this debut and I am excited to read the next book. I can’t really find anything I didn’t like about this book.

3 thoughts on “Review: The Bone Shard Daughter by Andrea Stewart”

My Tweets
Books and Chocaholic
BEFOREWEGOBLOG

Reading All The Books

Eyes on the Ball

Thoughts from the world of sport and the Schmoedown

The Little Booknerds in the Corner
Book Vagabond

But I really ought to be doing something else....

With freedom, books, flowers, and the moon, who could not be happy?

The place to read book reviews, bookish posts and the occasional off topic posts

Because life is better served with a good book and a cup of tea. Book reviews and general bookish writings. I love many genres, so all manner of books may appear on my blog.

always late to the SFF party ...

Tea, Books and Other Parts of Life

Your Source For Young Adult Books, Unboxings, and All Things Bookish