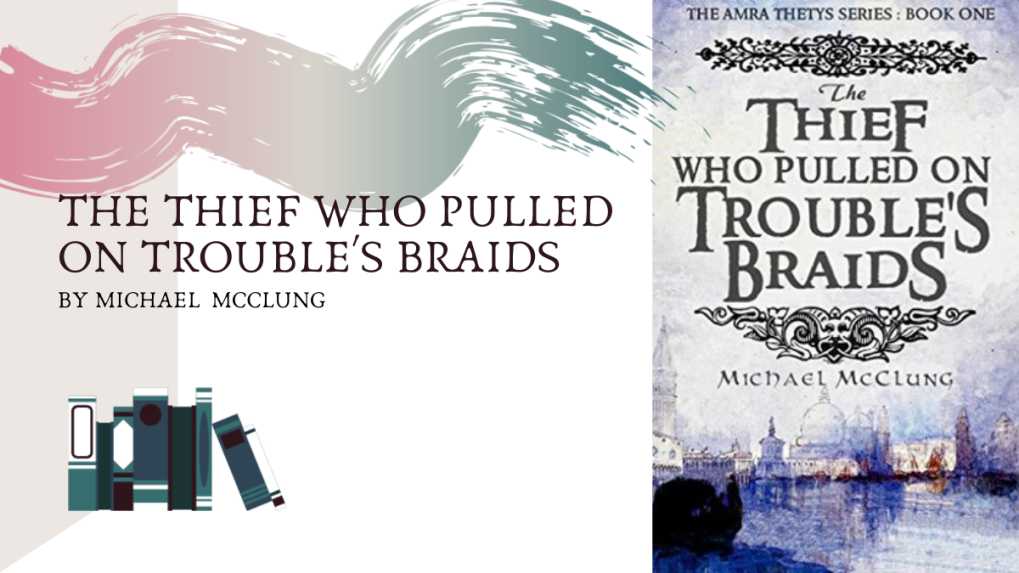 A few facts about The Thief Who Pulled on Trouble’s Braids:

I read The Thief Who Pulled on Trouble’s Braids on my Kindle first but I enjoyed it so much I bought the paperback and the next instalment for my shelves.

*Winner of the Self Published Fantasy Blog-Off, Hosted by Mark Lawrence*

Amra Thetys lives by two simple rules—take care of business, and never let it get personal. Thieves don’t last long in Lucernis otherwise. But when a fellow rogue and good friend is butchered on the street in a deal gone wrong, she turns her back on burglary and goes after something more precious than treasure: Revenge.

Revenge, however, might be hard to come by. A nightmare assortment of enemies, including an immortal assassin and a mad sorcerer, believe Amra is in possession of The Blade That Whispers Hate—the legendary, powerful artifact her friend was murdered for—and they’ll do anything to take it from her. Trouble is, Amra hasn’t got the least clue where the Blade might be.

She needs to find the Blade, and soon, or she’ll be joining her colleague in a cold grave instead of avenging his death. Time is running out for the small, scarred thief.

“I think I know you well enough now to say that you’re wrong. It’s become fairly plain that you, Amra Thetys, given the choice between fighting and capitulating, will pick a fight every damned time.”

Mmm, this book guys! This book. It was just what I needed to read.

McClung does an incredible job of building Amra’s world, it is done so well and in a gradual way. Each interactions brings forth more of this amazing world without spending the first however many chapters dumping an enjoyable and excessive amount of information on you. A few times I came across terminology I didn’t know, and at first I wasn’t sure if it was a place or a race of people which was a little distracting. Though, more often than not they were later elaborated on it just sometimes threw me, more because I’d then sit there and wonder if I’d missed something that explained what it was and flick back a few paragraphs to check. Which inevitable pulls you from the story.

The intrigue and mystery that filled this brilliant plot was wonderful and kept me reading throughout. Despite the shorter length of this book none of it felt rushed or underdeveloped. The entire book kept a steady and exciting pace. The world McClung created meant that you were constantly wondering what would go wrong so none of it felt dull.

I thoroughly enjoyed McClung’s writing style to, it was clean and crisp and enjoyable. At times it reminded me a little of Brian McClellan’s writing style but still remained uniquely it’s own.

Paragraph length of this book was good, I like short chapters sometimes so I can stop if I need to, so it was good to see certain sections of the book having pauses…perfect for making tea 🙂

With a brilliant world McClung didn’t fail to fill it with great characters. Corbin only appeared shortly in this story and I thought he was great. Amra was fun to read as she was blunt and was stubborn as a mule but was brave, she was truly a great character filled with humour.

”He glanced up when I came in, then fixed his attention back on his carving. I think it was supposed to be a pheckla, but mostly it looked like a turd.”

McClung also filled the world with other characters all unique in some way, making Amra’s interactions with them great to experience. I’m especially liked her dealing with the High Priest.

“Of course it’s real, you ignoramus. It’s real, extremely nasty, and very unhappy with its job. I shudder to think what would happen if it ever escaped the Necropolis. Gods willing, it would stumble across you first. Now piss off.”

I can not sing enough praises about this book, and fully understand why it won SPFBO. I would recommend this book to everyone, it is a series but can be read alone. I will definitely be reading the others! This is a fun read with a great female protagonist, a creative and gritty world and murder and intrigue. What’s not to love?

2 thoughts on “Review: The Thief Who Pulled on Trouble’s Braids by Michael McClung”